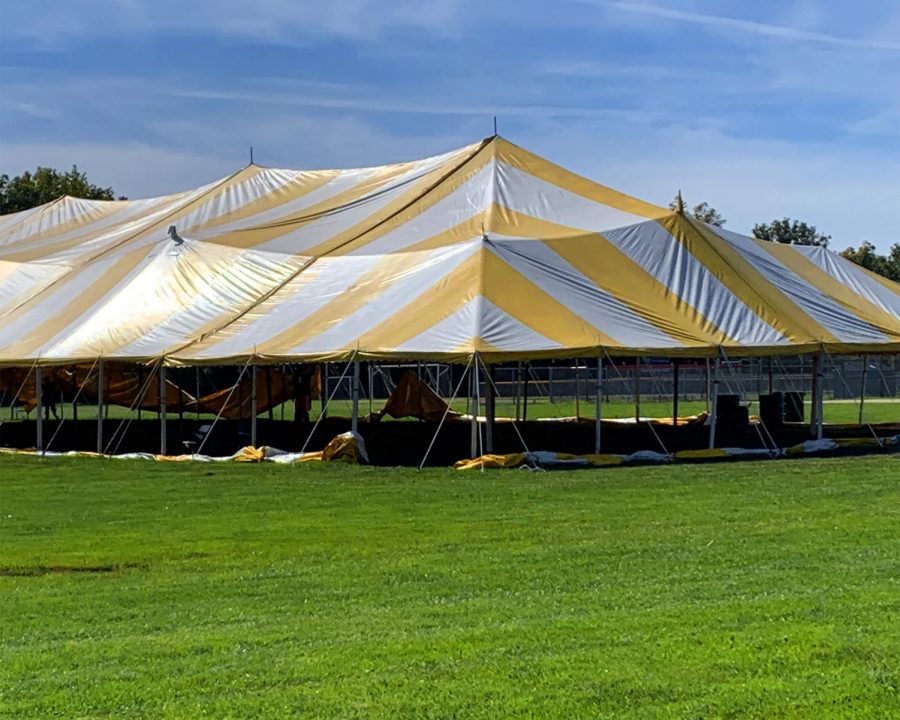 The tent used at Plymouth High School homecoming ready to be disassembled post-dance so P-CEP maintenance could start repairing the damages caused to the field.

Entering the giant, yellow-striped, circus-shaped tent beside the Canton Varsity Field, students were optimistic, looking forward to an unforgettable night with friends by their side at the Plymouth homecoming dance held on September 25.  An eight-foot tall inflatable alien decoration overlooked the scene as students piled into the dimly lit space. Little did we know we would never forget that night for a completely different reason.

The night started with people awkwardly standing around, waiting for others to start dancing, bumping into each other, and starting to huddle together due to the cold winds of the night entering the tent. The bare grass beneath our feet felt stable at first but rapidly became a hazard as the grass turned brown.

The ground was lava and students began to fall like the citizens of Pompeii. The thick substance, made by the students marching, created an environment similar to pigs rolling around in the mud. I saw a girl who fell into the mud while being shoved by the crowded marsh pit, which reminded me of a scene from Charlie and the Chocolate Factory when Augustus Gloop falls into the chocolate river. At the dance, however, there was nothing sweet about being shoved into filth by the large crowd of rowdy teenagers pushing each other and competing for space.

The president of Plymouth Congress, Nia Kalinovic, confirmed that originally a dance floor had been ordered, but the surface got canceled due to the high cost and change of location. “We were very unsure on what the budget should look like and how much money we were gonna make back, so we were just very cautious when it came to our budget-making,” Kalinovic said.

Congress at all three schools plays a major role in making the decisions and calling the shots of how each homecoming dance is planned, Kalinovic said Congress plans and executes decorations, setup, music, location and most other technical factors of the dance. Congress ran the risk of sponsoring a failing homecoming this year due to the lack of experience planning and executing an outdoor dance, yet the tickets sold out well before the day of the dance.

As the marsh pit began to cave progressively more and more into a mud version of quicksand, students began to lift their classmates over their heads to help them crowd surf and climb the pillars holding up the tent.

The Plymouth principal, Cheri Steckel, warned the students to not continue the unsafe behavior or there would be severe consequences.

“The people there were not very cooperative. There was a lot of crowd surfing when people told them not to and they just wouldn’t listen.” Plymouth Senior, Maria Harawala said. A ten-minute delay of the music was instated and by the time the 10 minutes were up, about a quarter of people had left the dance.

Throughout those ten minutes, students were resisting authority by booing and chanting against the principal. “She stopped the music and people started playing their own music. It was kind of funny,” said Plymouth senior, Maya Dhande.

At Canton’s homecoming the following Saturday, similar behavior resulted in larger repercussions. “One kid was hanging off of the top of the pole and I heard students talking back to cops and other chaperones, so they decided to shut the entire thing down,” said Aina Aspal, a student who attended Canton homecoming.

Since this was the first homecoming after two years of students being stuck quarantined, many students seemed to be letting out their energy in the form of irresponsible behavior, energy that had been built up during the endless hours spent at home during the pandemic. These students ruined the event for the rest of those students behaving respectfully.

Many angry students complained and demanded refunds after both the Plymouth and Canton homecoming dances, but what some did not understand was that the only way the dance was approved by the administration was because homecoming was a charity ball this year; therefore, all dances were non-refundable events. “This year what made our homecoming special is that it was a charity ball with a portion of the proceeds going to a charity,” said Kalinovic.

After the major events that took place at both Canton and Plymouth’s dances, Salem Congress decided to suspend ticket sales temporarily due to fear that its dance might be canceled.

A minority of  P-CEP students created a huge mess that was left for maintenance and management to deal with throughout all of the homecoming season. Although there were some mishaps due to the inexperience of planning an outdoor homecoming during a COVID-19 pandemic meant to avoid the spread of the virus, most of the issues during the dances were the fault of those students not choosing to follow the safety protocol put into place by administration.

A minority of students causing the threat of administration shutting down the homecoming dance and the actual shut down of Canton’s homecoming created a waste of the Student Congress’ time and money spent planning, a dance meant to celebrate the return of students at the Park.

The dance should have been held on either the parking lot or the varsity field like the following two homecoming events, but it is understandable that mistakes happen when planning large events. Sometimes mistakes must be made in order for a more successful future. As for the students’ behavior, it was unnecessary to cancel the entire event so soon when only the students misbehaving could have been removed from the dance.