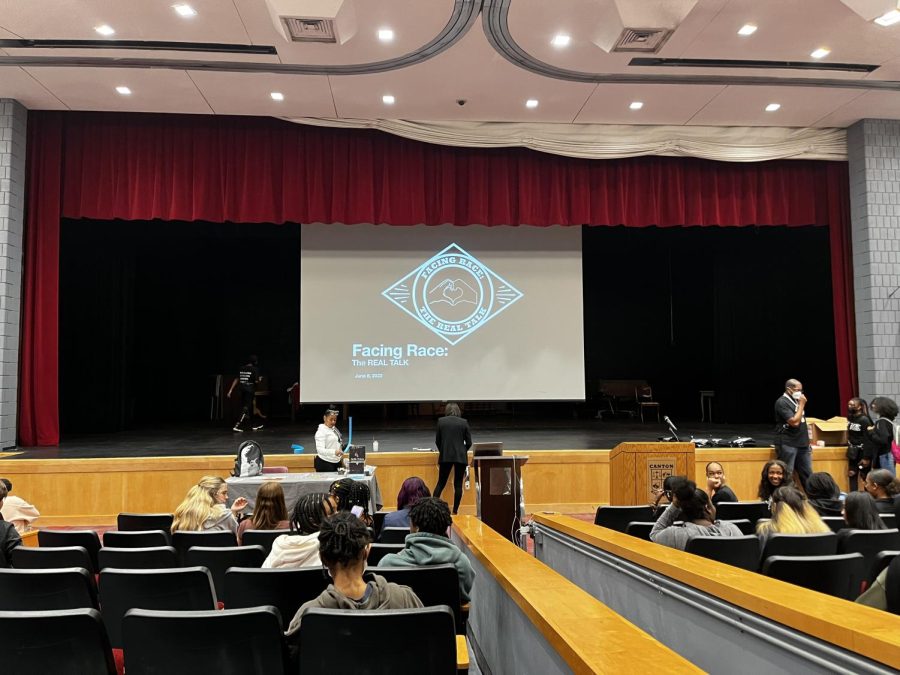 Students begin to gather with representatives and organizations to watch the beginning presentation inside of Canton High School. Allen DuBois Little Theatre. Jun, 8, 2022.

“I want to learn and grow,” answered one student attending the “Facing Race: The Real Talk” symposium after answering the opening question of the daylong discussion.

The symposium, hosted by the Plymouth-Canton Educational Park (P-CEP) Black Student Union (BSU), focused on three central themes with regard to race: awareness, education and action. Awareness of the issues that the community faces, education to equip students to challenge these issues and actions to carry out said challenges.

The event was designed to break the commonly held stigma of race being an untouchable issue.

The BSU hopes to make the symposium an annual event. For the inaugural year of 2022,  175 students registered with most being in attendance.

Sabrina Boykin, founder of the By Sabrina brand and diversity advocate, led the opening presentation and discussion for the event.

The discussion centered on the discomfort that many face when engaging in race-related discussions, and it took a look at the systematic disadvantages that many Black Americans face.

Towards the beginning of the discussion, Boykin drew an analogy comparing the training of circus animals to social change.

“When the elephant is young, [the circus workers] train it by tying it to a stake and forcing it to go around in a circle,” said Boykin. “When it grows it gets stronger, but the elephant doesn’t know that it can now pull the stake out of the ground and free itself.”

Boykin then emphasized how people can often get stuck in a complacent mindset based on the conditions of the world around them, which can halt societal progress and allow discrimination and discriminatory mindsets to continue.

“What brought you here today?” Boykin continued, addressing the students within the audience.

When Boykin questioned students about why they attended the event, the students provided reasons such as wanting to be surrounded by people with a similar mindset and wanting to be a part of the solution to the persistent problem of racism.

Other topics discussed in the presentation centered around the definition of race. Students provided a variety of responses: skin color, culture, behavioral traits, and more. One answer, however, was elevated by Boykin above the rest.

“The identity of your skin color,” another student replied.

A video titled The Unequal Opportunity Race then played, detailing the effects of slavery, racism and discrimination on modern day Black Americans.

The video presented students with a cartoon of four runners preparing for a race: two Black and two White individuals. The race began, but the Black runners were stopped from running towards the finish line by a physical barrier that symbolized the impact that slavery and Jim Crow laws had in delaying the advancement of minority groups. After the barrier was removed, symbolizing the end of the Jim Crow era, the Black runners were able to begin. As the Black runners were forced to endure setbacks,  the White runners completed lap after lap without many obstacles, symbolizing a decades-long cultural head start towards overall wealth and success. The Black runners continued to face obstacles in their way, representing cultural factors such as racial profiling and housing discrimination, while the White runners continued to receive boosts, such as a walking escalator and water bottles, symbolizing generations of accumulated wealth and prosperity.

“Life [for white Americans] is winning by default,” said one audience member, referencing the additional hurdles, such as racial profiling, housing discrimination and more, that many minority groups face in the modern world.

The presentation was followed by two sessions where students broke into groups of roughly 40 students each, where they talked to other students and facilitators about a variety of subjects and issues.

“I would say [the small group conversations] are highly constructive,” said Harriett Watford-Lowenthal, a representative from the Anti-Defamation League. “You could feel the energy in the room. We were discussing identity, using the iceberg as a model. Above the surface of the water, you can only see certain things, similar to identity. We’re asking [the students] to go beneath the surface and talk about their true identity.”

After a lunch break, the students attended one last conversation session before reconvening for the closing session.

The planning of the symposium took roughly eight weeks of work by eight to ten BSU members.

According to Andy Gusway, vice president of the BSU, the symposium was designed to “test the waters” for future symposium type events, as well as to serve as a way to ensure continual progress toward an anti-racist culture on the P-CEP campus following the student-led walkout this previous April.

“We wanted to follow up,” said Gusway. “We had the walkout and have been working with the administration to change the process of reporting [racist] incidents on campus, but we want to have additional discussions to emphasize the point. Yes, these students felt [angry at racism], but now we want to talk about it. We want to discuss things we can do moving forward and how we can improve the feeling of the community and around school.”

The BSU is attempting to harness the energy that many students feel while opposing racism, and use it to continue dialogue on the subject.

“Race is not an untouchable subject,” Gusway continued. “I do think that there is an air of caution and this idea that anyone who doesn’t understand [race and racism] completely will be judged or criticized for it.  [Dialogue] opens the door to allow students to learn and speak about [race].” 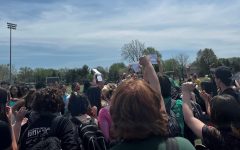 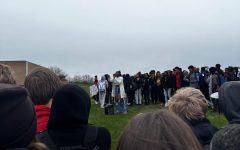 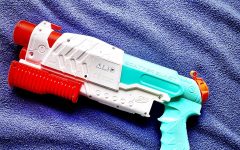 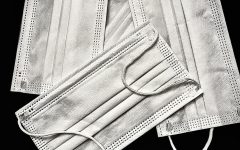 The Perspective • Copyright 2022 • FLEX WordPress Theme by SNO • Log in